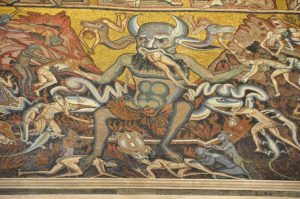 The last major plague happened just before the last Renaissance.  It has been said that because of the plague, which wiped out a third of clergy, people, and bureaucrats, it made it possible for the Renaissance to occur.  Revelations in its final paragraphs has the dragon thrown down into the pits of Hell.  It could be said that the Cabal and its minions are part and parcel to the evil forces that need to be cast down in order for Renaissance 2.0 to occur.  It is time to cast these demonic forces into Dante's Inferno.

What is an Internet borne Plague?

We are enslaved by those that have stripped our privacy and with it our sovereignty.  The latest Wikileaks revelations shows the sophistication of the tools used by the CIA and others in order to enslave, blackmail, coerce, etc. even by concocting data and who are the perpetrators with false footprints.

Therefore, we go to a higher source and wage Spiritual Warfare against these technology demons.   We will bring in the full Omnipotence of Father Creator in Heaven to unleash the full power of the Heavens to cast down these evil forces that are enslaving all of Humanity and destroying the Planet.

What does the Pizza & Hotdog Prayer do?

Pizza and Hotdog Prayer is a dual edged Spiritual Sword.  When you read the prayer it sets in motion that which the prayer is requesting of God the Father in the name of Jesus Christ, to do which is to destroy the Cabal and its minions (some of which are named by name the rest by association).  The Prayer includes many keywords that will trigger the file being picked up by the digital surveillance dragnet.

The other edge of the Spiritual Sword is that given the illegal and unconstitutional  dragnet surveillance by intelligence agencies, it fills their servers with the Prayer.  When someone reads it from any of the nefarious agencies, and entities, the Prayer is activated like the PLAGUE and does its thing Spiritually.

Why an Internet borne Plague?

We are being attacked by malware, and spyware, daily that originates from the demonic den of the Cabal and its minions both wittingly and unwittingly.  It is only befitting that we release a digital PLAGUE using an Internet borne transmission to distributed it to all corners of the digital globe where the Cabal operates with impunity.

It is time for us to be Spiritual Warriors and fight back with a Power Prayer that specifically addresses these demonic forces.

Help spread the Internet PLAGUE by downloading the Pizza and Hotdog Prayer.  Save it on all of your devices and social media accounts.  Email it far and wide because all emails are also in the dragnet.   Let all of their servers be filled with this Prayer.  Send the link to everyone you know.  Every person that reads the Prayer is a Spiritual Warrior that is fighting back because we have had ENOUGH.